Based on Angus Maddison, The World Economy (OECD Publishing, 2001)

At any time earlier than about 1000 AD, the material standard of living of almost every person was close to the minimum needed to sustain life. Societies in which the majority of the people attained a significantly higher standard of living have emerged only within the last two or three hundred years. Not all societies made the transition to higher living standards, so the lives of the poorest people today are much like the lives that everyone lived a thousand years ago. Had you been born three hundred years ago, your standard of living would not have been much different from that of the inhabitants of the village shown below.

The monuments of imperial Rome or the silks and porcelains of Imperial China might cause you to doubt this claim, but do not be misled by such things. It has always been possible for an elite to live extravagantly well (by the standards of the time) by skimming the output of the vast majority of the population. In late Manchu China, for example, 98% of the population worked to support the remaining 2%, and that 2% consumed 24% of China’s output.1 Before modern times the wealth of a very few was always built upon the poverty of the many.

Sometime after 1000 AD the material well-being of large numbers of people — not just the elites — began to rise in some parts of the world. The increase would ultimately be greatest in Europe and in a few countries known as the neo-Europes. The neo-Europes are countries that have climates similar to European climates. The Europeans who colonized these countries were able to import the technologies and agricultural techniques of their own countries, jumpstarting the new (or newly colonized) economies. The neo-Europes include Canada, the United States, Australia, and New Zealand. Europe and the neo-Europes are often collectively referred to as “the West”, and the West continues to enjoy the world’s highest standards of living today. Outside of the West, only Japan experienced an early and sustained rise in its standard of living.

The economist’s measure of material well-being in a given country is per capita output, the value of the goods and services produced within the country divided by its population. The increase in per capita output over the last few centuries has been so great that it is difficult to plot per capita output against time using linear scales. A scale that is fine enough to show the detail would result in a graph that won’t fit on a page, and a graph that fits on a page must use a scale so coarse as to obscure the detail. The usual way around this problem is to use logarithmic scales rather than linear scales.

The graph above shows a linear scale against which the values of some variable x can be measured. There is a “unit distance,” and moving to the right by this unit distance increases the value of x by one: 1 becomes 2, 2 becomes 3, and so on. Now consider the two graphs below, which use logarithmic scales.

All of these graphs are taken from Maddison. The data from the distant past are constructions based upon fragmentary information, so some parts of the graphs show trends but little detail.

The first graph shows per capita output in Western Europe and China over the last sixteen hundred years. Since there is a fixed vertical distance that corresponds to a doubling of per capita output, the logarithmic scale is base 2.

The next two graphs include only data for the last three hundred years, when most of the growth took place. There is a fixed distance associated with a ten-fold increase in per capita output, indicating that the logarithmic scale is base 10. The first graph compares China to the United Kingdom (the home of the Industrial Revolution). The United Kingdom experienced slow but sustained growth to the end of the Industrial Revolution, followed by faster sustained growth to the present day.2 China experienced stagnation and then decline, faltered dramatically during the revolutionary war, regained lost ground in its aftermath, and experienced rapid growth only in the final decades of the twentieth century. The second graph compares the Chinese experience to the even stronger growth of the United States. 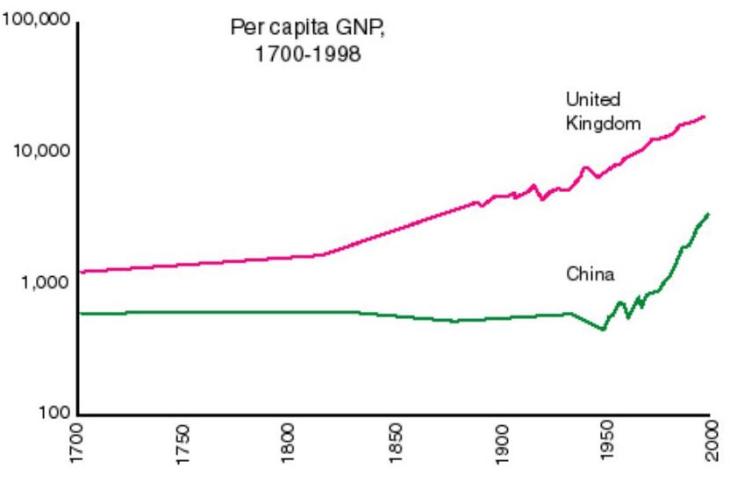 There was a time, long ago, when the vast majority of the human population had roughly equal living standards. The Industrial Revolution brought that situation to an end. It was a train that some countries caught and the rest missed. The countries that caught the train have grown steadily wealthier over the ensuing years. The countries that missed the train experienced little growth, at least until the last two or three decades of the twentieth century, and have yet to catch up. This observation explains the current global distribution of material well-being, as shown in the map below. Europe and the neo-Europes are wealthy; everyone else is straggling behind. Poverty in some parts of the world is as acute as it was hundreds of years ago. 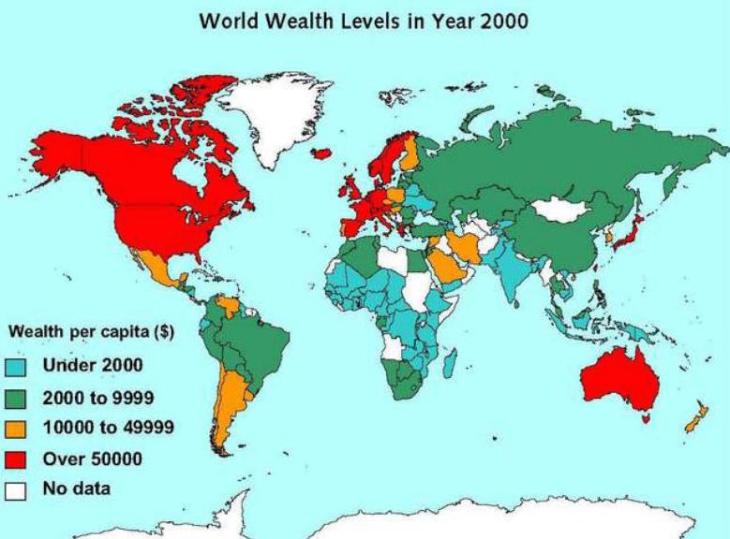