Based on Angus Maddison, The World Economy (OECD Publishing, 2001)

An increase in material well-being is in itself a good thing, but it also changes the quality of our lives in other ways.1 In 1000 AD the vast majority of lives were dominated by the simple business of survival. There was little need of education and little opportunity for it. Only the simplest forms of music and culture existed, and the human experience was further narrowed by superstitious fears. The move away from poverty resulted in a blossoming of the human experience.

Improved material well-being also resulted in substantially longer lives. Infant mortality (defined as death within the first year of life) declined, and the life expectancy of those who survived infancy rose. Malnutrition and its associated diseases became less common, and the mass killers, famine and plague, receded.

As a reference point, the first table shows Egyptian life expectancies during the Roman occupation of Egypt. At the moment of birth a child’s life expectancy was only 24. Almost one-third of the children died within the first year of life, but those who survived that perilous year could expect to live to the grand old age of 36.

Now look at England roughly twelve hundred years later. What gains have been made in life expectancy? None at all: it’s still 24. The first year of life has become less dangerous — only 1 in 5 infants are dying — but life expectancy for those who survived that year has fallen to 31.

The French in the early eighteenth century had the same life expectancy as the Egyptians had had seventeen hundred years earlier. It is possible that war and famine, which pushed France to the edge of collapse at this time, were responsible for these brutal numbers. One hundred years later, French life expectancy would match that of the English. 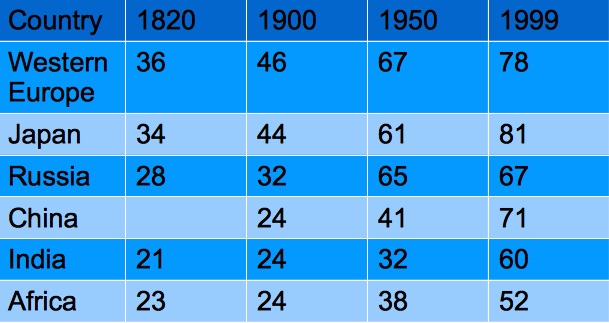 Russia did not develop early. The majority of its people remained locked in something like feudal serfdom until the Great Reforms of 1861, and even then progress was slow. The switch from a primarily agrarian economy to a primarily industrial economy did not even begin until the Communist revolution of 1917. This history is reflected in the life expectancies, which did not match European life expectancies until 1950. But neither Communism nor its late-twentieth century abandonment generated sustained growth in material well-being, and Russian life expectancies rose no further.

It seems unlikely that the increase in life expectancy can be attributed to the advance of medicine until at least the late nineteenth century. Scholars have keenly studied medicine for millennia, but progress was minimal until modern times. A medical textbook written by the Greek physician Dioscorides around 60 AD was still being reprinted more than 1100 years later, and textbooks written by the Islamic physician Ibn Sina around 1000 AD were still actively used in Europe more than 600 years later. After the Battle of Waterloo (1815) wealthy patients who had had limbs amputated (without antiseptics and without anaesthetics) received medical care that included daily bloodletting. Balancing the humours was believed to be the key to their recovery.

It could be argued that medicine did not become really effective until the introduction of antiseptics, anaesthetics and antibiotics, and these innovations are relatively recent. The use of antiseptics to cleanse wounds and sterilize the operating room was pioneered by Joseph Lister in 1865. Ether was sporadically used as a surgical general anaesthetic during the 1840s, but was not widely used for decades after that. The breakthrough in antibiotics was Alexander Fleming’s isolation of penicillin in 1940.

Not medicine but simple prosperity seems to have been responsible for our lengthening lives. Prosperity gave us better housing with less crowding, better basic hygiene and better nutrition. It gave us time to rest, and the resources to recover from injury or disease without starving. It permitted the development of systems to provide clean water and carry away sewage, reducing the incidence of disease and stretching out our lives.