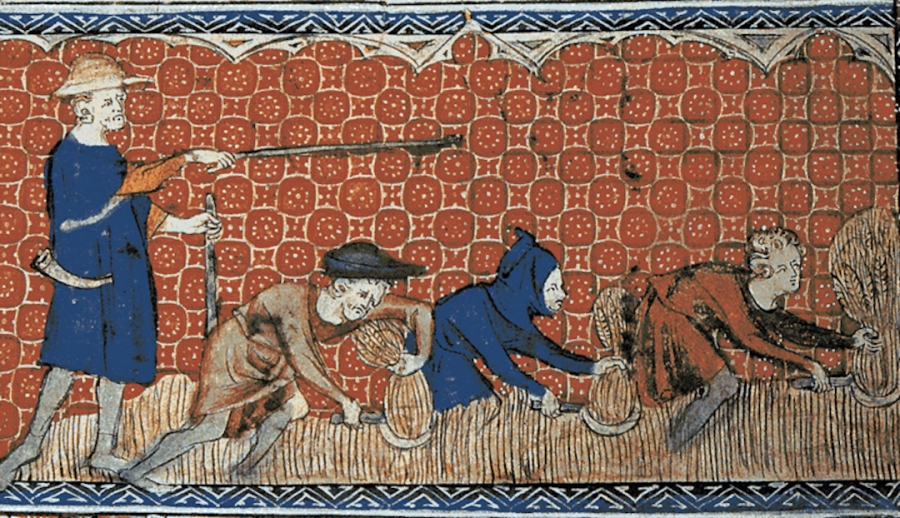 Based on Douglass North and Robert Thomas, The Rise of the Western World (Cambridge, 1973), and Nathan Rosenberg and L. E. Birdzell, How the West Grew Rich (Basic, 1986).

Feudalism was the economic and political system of Europe during the Middle Ages. One might be tempted to dismiss it as a primitive system, discarded when something better came along, but to do so would be to misunderstand human institutions. Darwin observed that there is no developmental hierarchy among organisms: there is only better or worse adaptation to a particular environment. The same principle applies to institutions. They are not more or less primitive, but only more or less well-suited to particular circumstances. Feudalism persisted for centuries because it was a workable response to the prevailing conditions, and it was abandoned only when conditions changed radically.

Europe as a Frontier Society

Most Europeans at the time of the Roman Empire lived in the south, near the Mediterranean Sea. Settled agriculture was possible there because the light soils could be easily tilled with the scratch plough, which was little more than a vertical blade dragged through the ground. Settled agriculture was uncommon in the more northerly part of Europe because the scratch plough could not cope with its moist and heavy soils. Since nine of ten people were engaged in agriculture, the southern part of Europe was well populated and the northern part was scantily populated. 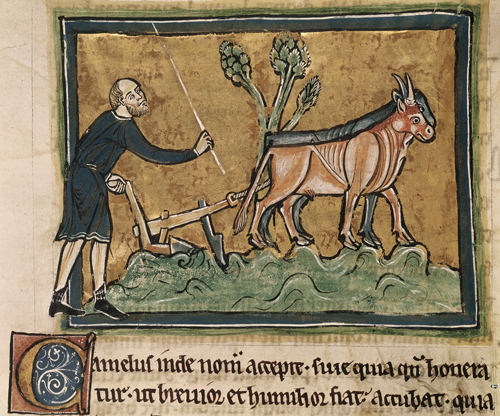 The opening of Northern Europe was not possible until the heavy plough appeared in the sixth century. This plough had three main parts. A vertical cutting knife opened a furrow. A ploughshare traveled in the furrow, undercutting the soil to one side. Behind the ploughshare was a mouldboard that lifted and turned over the undercut soil, burying the weeds and bringing the nutrients closer to the surface. The whole apparatus was carried on wheels and pulled by a team of four or six oxen. (The scratch plough needed no wheels and was pulled by a single pair of oxen.) Once broken by the heavy plough, the rich alluvial lands of the north became very productive farm land.

Settlement was nevertheless a slow process, taking centuries to complete. Europe’s population grew slowly, and new lands were cultivated only when they were required by population growth. Northern Europe during the second half of the first millennium was essentially a frontier society. North and Thomas describe Europe at this time as

…a vast wilderness thinly populated by Europeans living in family groups huddled together in small feudal villages, separated by expanses of natural vegetation. Except in Italy, cities as we now know them were almost non-existent.1

Life for the settlers was insecure as well as isolated. Bandits were common, as the deep forests made their capture difficult. Europe was also periodically raided by Vikings, Saracens and Magyars, as the map below shows. 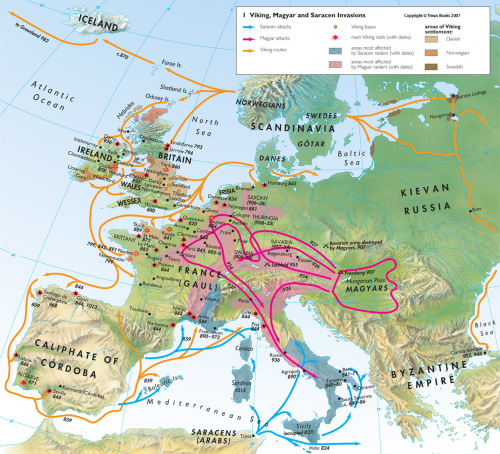 Since the population was thin and goods were difficult to transport over all but the shortest of distances, only local markets could exist. Communities had to be almost entirely self-sufficient, producing everything that they needed except for a few luxuries for the very rich. Although money existed, the lack of well-developed markets limited its usefulness. Almost all trade was barter.

Feudalism can be viewed as an integrated solution to the problems associated with life in this environment. The problems began at the top. The king required an army to maintain control of his kingdom and perhaps to extend it. This army was built around a cadre of knights. Knights were the dominant weapon of war, but they were expensive to train, equip and maintain. The knights were supported by men at arms, who were cheaper than knights but less effective on the battlefield. The problem for the king was how to bear the army’s costs. One option would be to raise tax revenue in cash throughout the kingdom and then spend it locally, but the scarcity of money made collecting taxes difficult. Even if the tax revenue could be collected, there were no deep local markets in which the money could be spent to provide for the army’s needs. Another option, collecting revenue in kind rather than in cash, reduced dependence on local markets, but the difficulties and risks of transportation made this option unreliable. The king, finding himself unable to finance a centralized army, instead chose to disperse his forces. He gave a group of his supporters, the lords, grants of land in exchange for their promise to train, equip and maintain a certain number of knights that they would bring to the king’s aid when called upon. Other grants of land were given in exchange for the promise of men at arms, or produce, or cash, or even clerical services. The lords generally retained part of their land grant for their own use, and granted the remainder to their supporters in return for similar promises.

A lord who had received a land grant had to exploit the land in order to meet his own needs and fulfill his promises to his king or overlord. In the absence of deep markets he would have to create an agricultural establishment (the manor) that was essentially self-sufficient. The labour to build and operate the manor was provided by landless labourers (serfs). The customs of the manor required each serf to work for the lord for a number of days each month, in return for the right to work certain strips of land for his own benefit.

Property rights determine the control of an asset. In the manor they were largely determined by customary usage. Customs were the serfs’ protection against an aggressive lord, and the lord’s way of extracting the most rent from his serfs. The manor’s reliance on custom made it a very conservative institution.

The serf’s right to his own labour was limited in many ways. He owed the lord a certain number of days of labour each month. One might view this obligation as in-kind payment of rent, a way of avoiding cash payments in a largely cashless economy, but it was not a rental agreement that he was free to refuse. Serfs were legally attached to the manor, and so were any children that they might have. A serf needed the lord’s permission to move away from the manor, and if the lord gave his permission, he expected to be compensated for his loss. There were also fees that had to be paid to the lord on the marriage or death of a serf.

A serf who believed his condition to be particularly onerous could flee the manor, but if he was caught, he was likely to be returned. His best chance of escape was to head for the frontier areas where new manors were being established: the shortage of labour there might cause a lord to be less circumspect about the origins of a newly arrived worker. Even then he was only trading one master for another. Later, when towns began to develop, he could flee to a town. The custom in some places was that a serf who fled to a town and evaded capture for one year became a free man of the town.

The fields on the manor were divided into long narrow strips, and every strip was assigned to a particular serf or to the lord. Custom dictated that a lord could not remove a serf from the manor, nor in any other way appropriate or reassign his strips. The produce that a serf grew on his strips was his own, and provided sustenance for himself and his family. However, decisions pertaining to farming — what and when to plant, when to harvest — were made communally. The heavy plough and the oxen to pull it were a sizeable capital investment, and were shared by the community members, making ploughing a community endeavour. Gains from cooperation in planting and harvesting also followed from the narrowness of the strips.2 A serf’s strips would be inherited by his sons, and the entire manor would be inherited by the lord’s sons.

These customs had some adverse incentive effects. The serf received no benefit from his days working for the lord, and was likely to expend as little energy as possible on these days. This behaviour reduced the productivity of the manor. Also, the customs of the manor often prevented the serf from working where the rewards were greatest. There was, for example, too little movement between the older parts of a kingdom and its frontier areas. The older areas had ample populations and the loss of a few serfs would have been of little consequence, while the frontier areas needed labour and a few more serfs would have been of considerable value. The movement of serfs from the older areas to the frontier areas would therefore have been beneficial, but the customs binding serfs to their manors made this movement difficult to achieve.

The restrictions on land use also had adverse incentives. The concept of customary usage meant that major changes in the operation of the manor were difficult to implement, and the division of the manor into small strips sometimes prevented economies of scale from being realized.

Feudalism was a system that allowed people to survive in dangerous, sparsely populated territory. It had very little potential for intensive growth, because private and social benefits and private and social costs were badly misaligned.